“Herb Berger has found a new voice on the chromatic harp.  He has a lyrical and compelling sound that works incredibly well with the beautiful material on this album.” (Bob Mintzer)

Its sound can gush with sensuality or melancholy, with reflection or earthy expression: if improvisation is the art of transforming feelings into music then the harmonica is the ideal instrument for it.  In spite of that, it leads a closet existence in jazz.  Why?  Perhaps because it’s not easy to master.  A chromatic harmonica doesn’t let you distract from the absence of a musical statement quite simply by blowing effective phrases.  Even when hot air is needed to get it to sound: the harmonica doesn’t allow for moist chatter.  It challenges the soloist to concentrate constantly on that which is essential.

Herb Berger has taken his time.  As a saxophonist, the Salzburger has been considered for a long while as one of the most capable jazz musicians in the country.  Since four years his passion now belongs entirely to the harmonica.  The impressive result can be heard on “The Bitter End” (Meander Records/Hoanzl).  For his solo album, Herb Berger together with long standing companions (Christian Wegscheider, piano, Alexander Meik, bass and Stephan Eppinger, drums) has newly interpreted his own compositions from the last 20 years of his career.

Whether in “Snow Bop,” out of which flashes the altered melody from “Leise rieselt der Schnee,” in the dreamy H.C. Artmann arrangement “Aurora” or in the title track, a homage to the New York jazz club “The Bitter End”: what counted in the sessions was the greatest possible freedom in playing.  All of the songs were recorded live in two days, without subsequent additions.  In the compact playing of the quartet as in the more intimate duos with the harmonica and piano that quality that lends jazz its unmistakable fascination is clearly felt: the strength of spontaneity.  The magic of the moment.

Herb Berger as soloist illuminates his multi-facetted originals conjointly with the maturity of an experienced virtuoso and the freshness of a musician discovering exciting new territory.  And that sounds in each of the twelve songs sensual, melancholic, reflective and strongly expressive.

Two have found themselves! 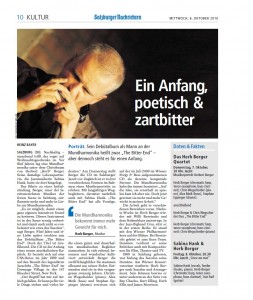 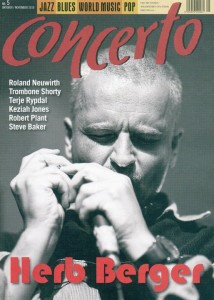